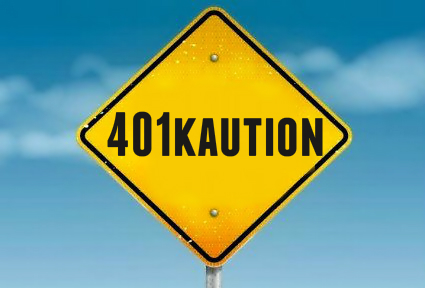 Just since the late seventies when 401(k)s came on the scene, trillions of dollars invested in this vehicle have simply vanished during market crashes such as these. This translates to real people who have lost real money – sometimes half of their savings – pushing back their retirement plans, or dashing them altogether.

A few years back, CBS produced several “60 Minutes” segments revealing the truth about the history, purpose and problems with the 401(k). Turns out this primary source of retirement income for 60+ million Americans was never designed to be a retirement plan in the first place.

They were created in the late 1970s as a savings plan and tax shelter for ordinary Americans. The idea was that workers would make voluntary contributions and employers would match a portion of them. The taxes would be deferred until the employee reached the age of 59 and a half.

It was supposed to supplement the two traditional income streams for retirees – Social Security and pensions. One leg of a three-legged stool that would support American workers into their golden years. But it didn’t turn out that way.

Because 401(k)s turned out to be so much cheaper than funding pensions, many companies decided to freeze their pension plans and replace them with 401(k)s. The decision created millions of new employee investors for Wall Street and the financial community. The biggest beneficiaries by far were the mutual funds, and they pounced on the opportunity. (See the full story.)

Are they a bad investment over the long haul? Maybe not. But keep in mind two important truths: they were intended to only be a portion of your retirement planning, and they are based entirely on the performance of the stock market.

Perhaps you could care less that billionaire George Soros recently doubled his bet that the market is heading for a crash, or that in December China sold the second-largest amount ever of U.S. Treasury bonds. Let’s say you’re not concerned that Obama has more than doubled marketable U.S. debt, or that there are eerie parallels between the stock market’s recent behavior and how it behaved right before the 1929 crash.

Even if this doesn’t faze you, why would you not want to consider a better alternative, if you knew it existed? One which locks in gains from upside potential but has no downside market risk. One with no annual management fees, and where commissions are not paid from your contributions or earnings (i.e., you do not pay for them!) One that can provide guaranteed lifetime income, and insure your life and/or nest egg in the process.

This is exactly what a fixed indexed annuity and indexed universal life insurance does. Really. Watch this brief video to get more info.

Chris did an amazing job helping my company setup a retirement plan that was very specific to our company and our industry. We have been very pleased … END_OF_DOCUMENT_TOKEN_TO_BE_REPLACED

I cannot thank you enough for your quick response and site visit. Our Site Manager called today to thank me, and let me know what a great service you … END_OF_DOCUMENT_TOKEN_TO_BE_REPLACED

Chris provided an amazing way for my artists to save money and reduce costs. Chris has taken each individual artist and customized a plan according to… END_OF_DOCUMENT_TOKEN_TO_BE_REPLACED

Chris was diligent in finding us just the right plan to fit our needs and our business. And we found a great relationship in him as well. Thanks Chris… END_OF_DOCUMENT_TOKEN_TO_BE_REPLACED

Chris Nesbitt is the best. I have worked with several financial consultants over my 30 years as an attorney and as an investor. Chris explained the av… END_OF_DOCUMENT_TOKEN_TO_BE_REPLACED

I have known Chris Nesbitt for over 15 years.  He is a man of integrity, with whom I would entrust any of my worldly possessions, including my life sa… END_OF_DOCUMENT_TOKEN_TO_BE_REPLACED

After we received notification from our health insurance company that they were cancelling our existing group plan due to the ACA, Chris helped us nav… END_OF_DOCUMENT_TOKEN_TO_BE_REPLACED