Too Big for its Britches? 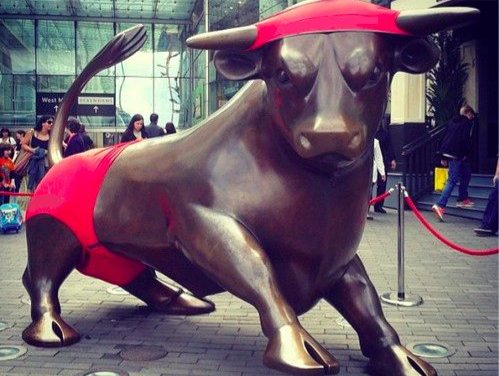 The following quotes are all from this recent week…

“…the next five months into year-end are going to be extremely treacherous for equity investors.”

“Stock may get rattled by a shallow U.S. recession starting early next year, caused by slack consumer spending and a slower labor market”

“It may take months and months for the correction to develop. I don’t look at how low the market drops, but how it rallies. I will look for lower highs and lower lows. Every rally aborts before the previous high, and every decline penetrates and accelerates below the previous low.”

~Mark Cook, Cook Cumulative Tick (when predicting that within 12 months, the market will suffer a 20% or greater pullback):

“By all measures, the U.S. stock market is currently frothy,”

“High cash levels say the summer ‘melt-up’ is not over yet. But with both institutional and private client allocations to stocks at multi-year highs, we think an autumn correction is increasingly likely.”

“You remember that kid in elementary school, the one who would argue during a game of tag: “You said you have to tag the person. Well you only touched my clothes, and that isn’t a person.” Remember that kid? That kid is Wall Street.”

“It’s like a storm coming. You don’t have to be a weatherman to see clouds.”

“The stock market has recovered so sharply for so long, you have to assume somewhere along the line we will get a significant correction.”

“…if most money is hiding out in the S&P 500, then we are seeing a narrowing of attention by traders. On that point, it is often said that the narrower a rally gets, the closer it is to nearing its end. While this will only be known with hindsight, it is worth nothing that “staircase up/elevator down” dynamics haven’t disappeared. The relative collapse is a humble reminder that advances can be given back in a moment’s notice when you least expect it, regardless of asset class, strategy, or cap.”

“Two years of uninterrupted gains in U.S. stocks are sowing anxiety among financial professionals, with three in five saying the market is on the verge of a bubble or already in one, the Bloomberg Global Poll found.”

“U.S. stocks are now about 80% overvalued on certain key long-term measures, according to research by financial consultant Andrew Smithers, the chairman of Smithers & Co. and one of the few to warn about the bubble of the late 1990s at the time.  According to Smithers’s data, we are now in the third biggest bubble in U.S. history.”

“Warren Buffett’s ‘best single measure of where valuations stand,’ comparing the market value of US companies to the gross national product before inflation, is flashing near record bubble red.”

“While we can eventually recover from a market crash—it only took 14 years to get back to even from 2000—we can not regain the time lost to save, and grow, our investments to fund our retirement. It is critical to remember that what the index does from one year to the next is far less important than understanding what the ramifications to your long term investment and financial planning goals will be if you are wrong.”

Well said.  If the chorus of counsel from this article leaves you uncertain about your own investments, let’s chat.

Chris did an amazing job helping my company setup a retirement plan that was very specific to our company and our industry. We have been very pleased … END_OF_DOCUMENT_TOKEN_TO_BE_REPLACED

I cannot thank you enough for your quick response and site visit. Our Site Manager called today to thank me, and let me know what a great service you … END_OF_DOCUMENT_TOKEN_TO_BE_REPLACED

Chris provided an amazing way for my artists to save money and reduce costs. Chris has taken each individual artist and customized a plan according to… END_OF_DOCUMENT_TOKEN_TO_BE_REPLACED

Chris was diligent in finding us just the right plan to fit our needs and our business. And we found a great relationship in him as well. Thanks Chris… END_OF_DOCUMENT_TOKEN_TO_BE_REPLACED

Chris Nesbitt is the best. I have worked with several financial consultants over my 30 years as an attorney and as an investor. Chris explained the av… END_OF_DOCUMENT_TOKEN_TO_BE_REPLACED

I have known Chris Nesbitt for over 15 years.  He is a man of integrity, with whom I would entrust any of my worldly possessions, including my life sa… END_OF_DOCUMENT_TOKEN_TO_BE_REPLACED

After we received notification from our health insurance company that they were cancelling our existing group plan due to the ACA, Chris helped us nav… END_OF_DOCUMENT_TOKEN_TO_BE_REPLACED